“British Indian troops fought alongside Sudanese in Eritrea in 1941 winning the decisive battle of Keren (Bengal Sappers won a Victoria Cross for mine clearance in Metemma, now on the Sudan-Ethiopia border). The Sudan Block at India’s National Defence Academy was partly funded with a gift of one hundred thousand pounds from the Sudanese Government in recognition of the sacrifices of Indian troops in the liberation of Sudan in the North African Campaign during World War II.”

“At the 1955 Bandung Conference, the delegation from a still not independent Sudan did not have a flag to mark its place. Taking out his handkerchief, Jawaharlal Nehru wrote “Sudan” on it, thus reserving a place for Sudan in the international community.” 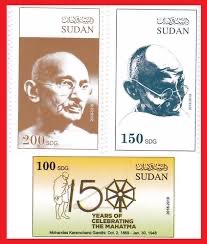