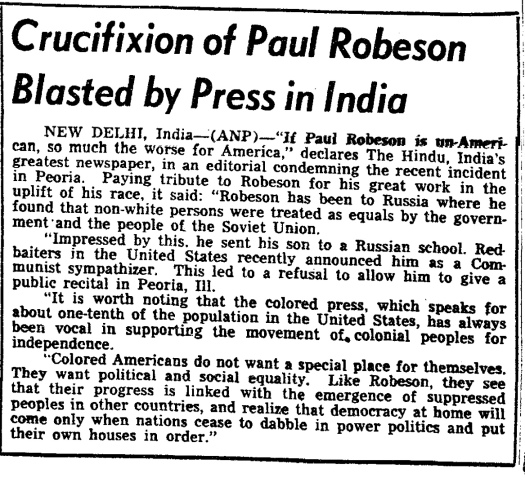 As revolutionary India entered the world stage as a free nation in 1947, The Hindu, a widely read Indian newspaper, condemned the banning of Paul Robeson’s public performance in Peoria, Illinois as a consequence for his agitation for world peace and the freedom of oppressed peoples everywhere. “If Paul Robeson is un-American, so much the worse for America,” declared the writer of the piece. The article was republished on the first page of The Baltimore Afro-American on May 24, 1947

In 1956, Robeson would be viciously targeted for his support of the erstwhile Soviet Union and his lifelong admiration for the Russian Revolution as well as the revolutions of Asian and African peoples for independence from colonial rule by the House of Representatives Committee on Un-American Activities, which was established in 1938 in efforts to quell the rising tide of communism as the American nation struggled against a deep economic depression. Robeson’s heroic defense at the investigation against the encroachments of the virulent Jim Crow, anti-communist regime:

Could I say that the reason that I am here today, you know, from the mouth of the State Department itself, is: I should not be allowed to travel because I have struggled for years for the independence of the colonial peoples of Africa. For many years I have so labored and I can say modestly that my name is very much honored all over Africa, in my struggles for their independence. That is the kind of independence like Sukarno got in Indonesia. Unless we are double-talking, then these efforts in the interest of Africa would be in the same context. The other reason that I am here today, again from the State Department and from the court record of the court of appeals, is that when I am abroad I speak out against the injustices against the Negro people of this land. I sent a message to the Bandung Conference and so forth. That is why I am here. This is the basis, and I am not being tried for whether I am a Communist, I am being tried for fighting for the rights of my people, who are still second-class citizens in this United States of America. My mother was born in your state, Mr. Walter, and my mother was a Quaker, and my ancestors in the time of Washington baked bread for George Washington’s troops when they crossed the Delaware, and my own father was a slave. I stand here struggling for the rights of my people to be full citizens in this country. And they are not. They are not in Mississippi. And they are not in Montgomery, Alabama. And they are not in Washington. They are nowhere, and that is why I am here today. You want to shut up every Negro who has the courage to stand up and fight for the rights of his people, for the rights of workers, and I have been on many a picket line for the steelworkers too. And that is why I am here today. . . .