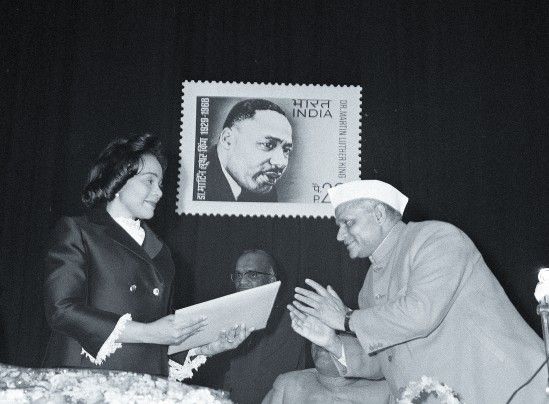 On January 30, 1958, to mark the 10th anniversary of the Mahatma’s passing, Martin Luther King, then just known as a clergyman who was using Gandhian methods — this was before his visit to India — wrote an article for Hindustan Times on why India’s father of the nation belonged “to the ages”.

MAHATMA GANDHI has done more than any other person of history to reveal that social problems can be solved without resorting to primitive methods of violence. In this sense he is more than a saint of India. He belongs — as they said of Abraham Lincoln — to the ages. In our struggle against racial segregation in Montgomery, Alabama, I came to see at a very early stage that a synthesis of Gandhi’s method of non-violence and the Christian ethic of love is the best weapon available to Negroes for this struggle for freedom and human dignity. It may well be that the Gandhian approach will bring about a solution to the race problem in America. His spirit is a continual reminder to oppressed people that it is possible to resist evil and yet not resort to violence.

The Gandhian influence in some way still speaks to the conscience of the world as nations grapple with international problems. If we fail, on an international scale, to follow the Gandhian principle of non-violence, we may end up by destroying ourselves through the misuse of our own instruments. The choice is no longer between violence and non-violence. It is now either non-violence or non-existence.

Oppressed people can deal with oppression in three ways. They can accept or acquiesce. Under segregation they can adjust to it. Yet non-cooperation with evil is as much a moral obligation as is cooperation with good. The minute one accepts segregation, one cooperates with it. Oppressed people can, on the other hand, resort to physical violence, a method both whole nations and oppressed peoples have used. But violence merely brings about a temporary victory and not permanent peace. It creates ever new problems. Gandhi has come on the scene of history with still another way. He would resist evil as much as the man who uses violence, but he resists it without external violence or violence of the spirit. That is what Gandhism does. It is a method of the strong. If the only alternative is between cowardice and violence, it is better — as Gandhi said — to use violence, but there is another way.

I myself gained this insight from Gandhi. When I was in theological school, I thought the only way we could solve our problem of segregation was an armed revolt. I felt that the Christian ethic of love was confined to individual relationships. I could not see how it could work in social conflict. Then I read Gandhi’s ethic of love as revealed in Jesus but raised to a social strategy for social transformation. This lifts love from individual relationships to the place of social transformation. This Gandhi helped us to understand and for this we are grateful a decade after his death.

A Baptist clergyman in Montgomery, Alabama, Dr King has been called “the American Gandhi “ for his leadership of the Montgomery Improvement Association in its successful campaign against bus segregation using non-violent methods.