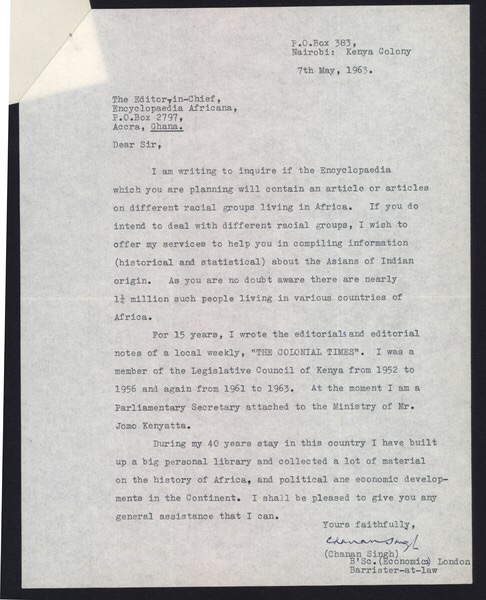 In this letter dated May 7th, 1963 from Nairobi, Kenya, Kenyan official Chanan Singh writes to W.E.B Du Bois about the possibility of contributing to the Encyclopedia Africana. Du Bois had very early established the need for a an encyclopedia that presented the truth about Africa and its civilization in place of the lies of Western Enlightenment. He endeavored to develop a Black equivalent to the colonial Encyclopedia Britannica and thereby overturn Western epistemologies of knowing and being. As he put it in his 1945 essay, “The Need for an Encyclopedia Of The Negro,”

There is need for young pupils and for mature students of a statement of the present condition of our knowledge concerning the darker races and especially concerning Negroes, which would make available our present scientific knowledge and set aside the vast accumulation of tradition and prejudice which makes such knowledge difficult now for the layman to obtain: A Vade mecum for American schools, editors, libraries, for Europeans inquiring into the race status here, for South Americans, and Africans.

Notably, Singh–who was then serving in the capacity of Parliamentary Secretary to Jomo Kenyatta, Kenya’s first President from 1964 to 1978–inquires whether Du Bois’s proposed Encyclopedia Africana will include articles about Indians living in Africa and offers assistance with compiling historical and statistical information on the subject:

I wish to offer my services to help you in compiling information about the Asians of Indian origin… For 15 years, I wrote the editorials and editorial notes of a local weekly, The Colonial Times. I was a member of the Legislative Council Of Kenya from 1952 to 1956 and again from 1961 to 1963.

Singh’s letter is significant, in part, because it once again illustrates the geographic and epistemological continuities between Africa and Asia and the necessity of looking at their civilizations in a continuum. Many thanks to the folks at Black Agenda Report for picking up “Reflections on the Pan Afro-Asiatic Civilizational Complex.”